Prometheus, A Brand New Multi-Pitch On The South Face Of Telendos

Home/Latest news/Prometheus, A Brand New Multi-Pitch On The South Face Of Telendos

Prometheus, A Brand New Multi-Pitch On The South Face Of Telendos

Staggering along with heavy loads of gear in the deep heat of the South Face after spending a week equipping The Titan Towers was perhaps an unlikely moment of inspiration to volunteer for yet more arduous labour … however that ‘Lightning Bolt’ groove high up on the huge unclimbed wall above the Telendos village had kept us animated about its prospects the whole trip. In the middle of the complex face was a long elegant pillar of clean limestone, a finger from our supportive Titan pointing the way with a compelling zig-zag lightning bolt to show us the path.

We didn’t make any plans but we knew that whatever it took we’d both be standing there again, the next year. 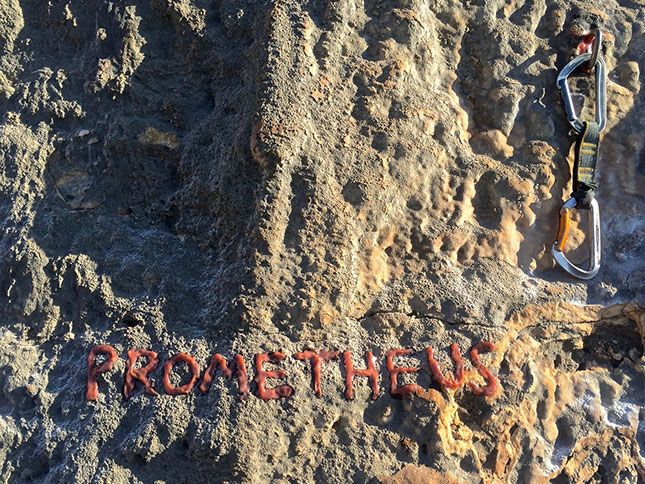 The less elegant aspect of new routing is lifting up 143 bolts, 10 anchor sets, hundreds of metres of rope, drills, batteries, tubes of glue and a considerable array of other paraphernalia. Wondering how you’re going to fit everything into your Easyjet bag is one consideration, another is how you’re going to get half of it up to the top of Telendos.

Luckily Francis landed in Kalymnos several days before me, and eager to start, hauled freight up a cunning path to the summit Telendos plateau. Rigging a line safely on a big wall with multiple hazards and getting the detail of the line of the climb sorted is usually the hardest part of the game. Francis pushed hard and in five hours made it from the boat landing at Irox up to the summit and managed to fix a line down the whole pillar!

It was nice to feel in a holiday mood as we engineered the approach path and started working together drilling and cleaning the pitches while always looking out over the stunning view over onto Kalymnos and the coming and goings of the ferries and people, quite a different atmosphere from our earlier experience, several years before, feeling all alone up on the isolation of the Eterna face.

Five days of dust, dirt and discomfort passed us by. Relief from the constant heat of the sun was found in rewarding cold bottles of Mythos drank in the late evenings spent at the waters edge down in the village. Finally the work was done. We had tried hard to make the route as safe and friendly as possible along with (as before) placing extra bolts at all the various belays to help facilitate any future rescue. 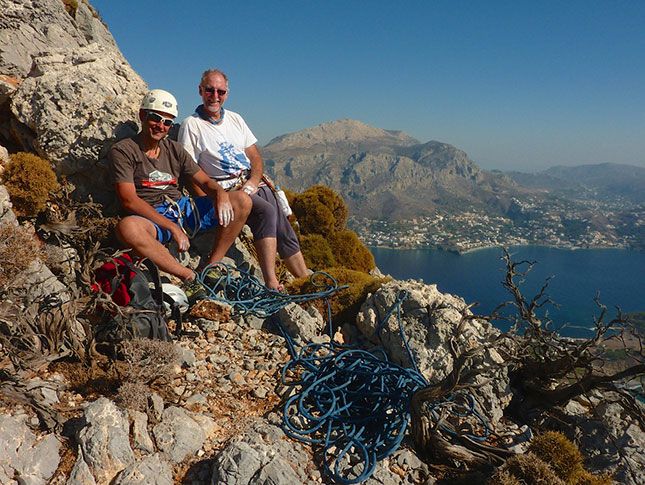 It feels exciting to be standing with just quick-draws and chalk at the base of the climb after so much effort and anticipation. Tom Rogers joins us and we all take a slow pace up the climb savoring our position but also weighed down by the heat of the airless day. The first pitch is the crux and a Beauty too, the White Shield has lots of fun bridging, Put a Zeus In It is a sea of funky chicken-heads and the Lightning Bolt pitch delivers as expected. Arriving near the top at the shady bower amidst the spacious comforts of the terrace that is the Grand Goat Hotel we relax and lie about while sipping the last of our water. One final short pitch and then we’ll be finished.

The route is Prometheus, named after our friendly Titan. 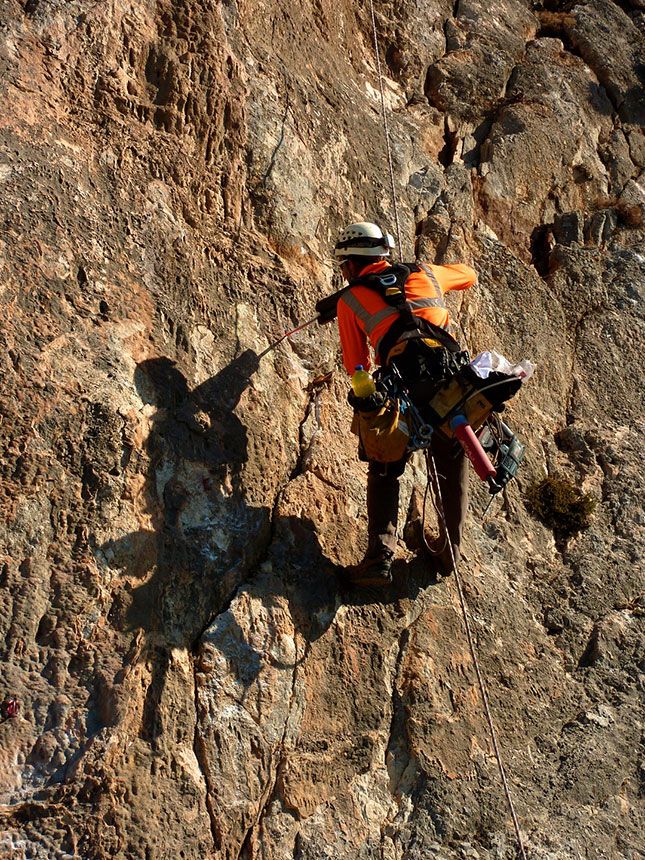 Back home there is news that our climb has had an immediate second ascent. It’s gratifying to hear positive comments that they enjoyable the route, found it well geared as well as appreciating our marked path down from the summit. We’re remembering the sights, sounds and smells of Kalymnos and wondering where we might be next year…

(A special thanks to Titan Climbing and Steve & Sue McDonnell for all their support).

Access:
Prometheus climbs the prominent pillar midway between Telendos village and the entry into the Inspiration sector. Follow the approach as for Inspiration then head upslope at a junction marked by three yellow dots. Further yellow waymarks and cairns lead to a rope hand-line on a short slab. Continue up to a cool, shady tree at the foot of the cliff where further hand-lines aid an easy traverse left to the large pedestal at the base of the route. Approach time 35 mins.

Descent:
Follow yellow waymarks and cairns up across the summit plateau to the far ridge then descend a gully as a short-cut to the chapel of St Constantine. 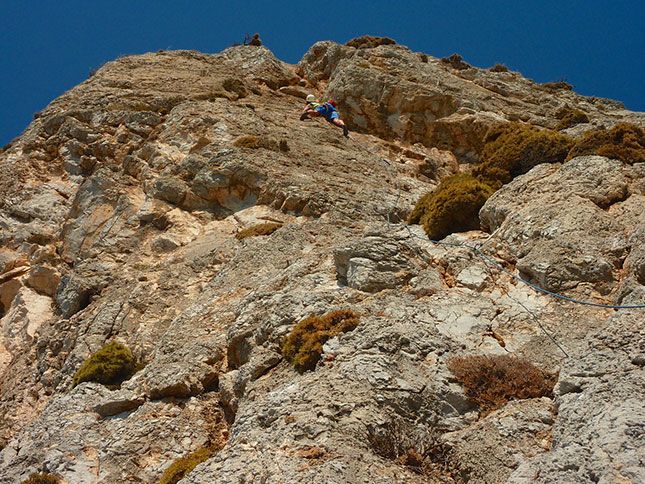 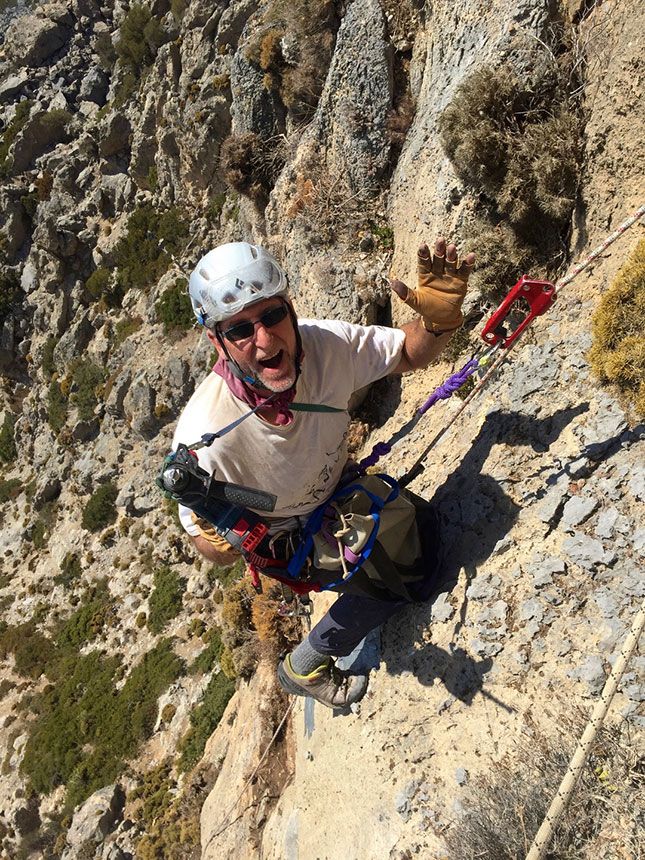 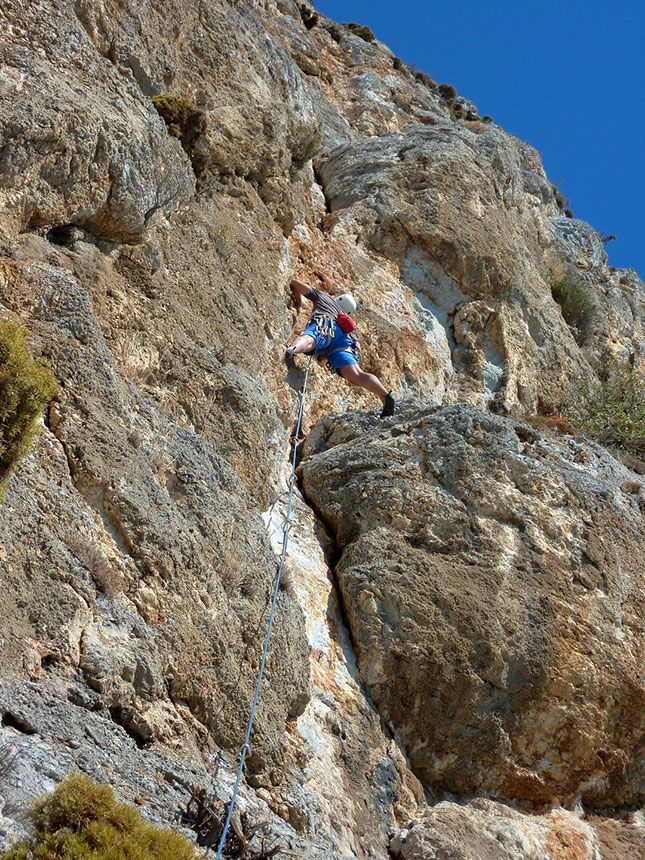 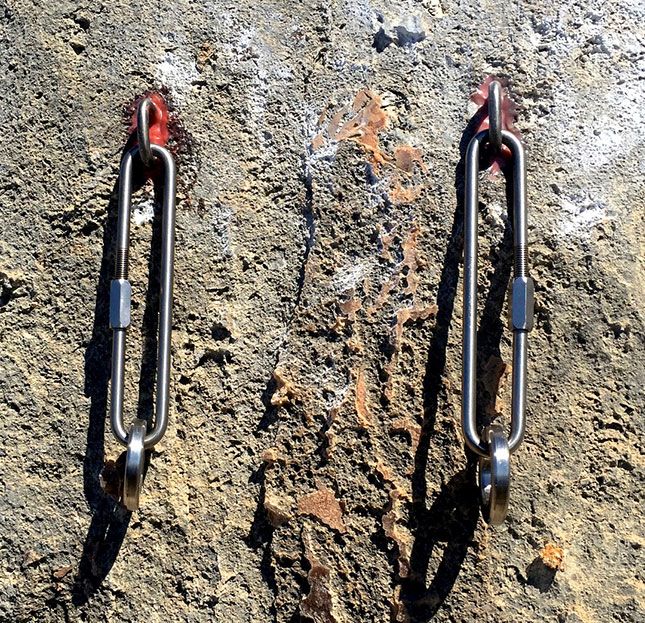